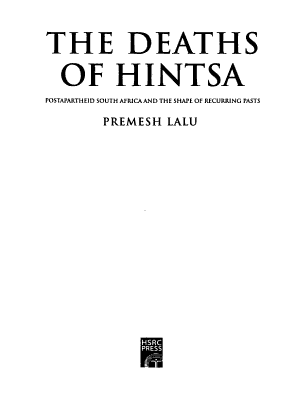 "In 1996, as South Africa's Truth and Reconciliation Commission was beginning its hearings, Nicholas Gcaleka, a healer diviner from the town of Butterworth in the Eastern Cape province of South Africa, set off on a journey to retrieve the skull of Hintsa, the Xhosa king. Hintsa had been killed by British troops on the banks of the Nqabarha River over a century and a half before and, it was widely believed, been beheaded. From a variety of quarters including the press, academia and Xhosa traditional leadership Gcaleka's mission was mocked and derided. Following the tracks of Nicholas Gcaleka, author Lalu explores the reasons for the almost incessant laughter that accompanied these journeys into the past. He suggests that the sources of derision can be found in the modes of evidence established by colonial power and the way they elide the work of the imagination. These forms and structures of knowledge in the discipline of history later sustained the discourse of apartheid. The Deaths of Hintsa argues for a post-colonial critique of apartheid and for new models for writing histories. It offers a reconceptualisation of the colonial archive and suggests a blurring of the distinction between history and historiography as a way to set to work on forging a history after apartheid."--Publisher's website.

The Deaths of Hintsa

"In 1996, as South Africa's Truth and Reconciliation Commission was beginning its hearings, Nicholas Gcaleka, a healer diviner from the town of Butterworth in t

Grappling With the Beast

Two volumes introduce the history of colonial wars in Africa and illustrate why African countries like the Democratic Republic of Congo, Nigeria, Somalia, and S

This book combines poetry, prose, and theory in ways that speak to each other to offer new insight to the connectedness of the colonial world.

This electronic version has been made available under a Creative Commons (BY-NC-ND) open access license. Human remains and identification presents a pioneering

This groundbreaking book challenges standard interpretations of metropolitan strategies of rule in the early nineteenth century. After the Napoleonic wars, the

Museums flourished in post-apartheid South Africa. In older museums, there were renovations on the go, and at least fifty new museums opened. Most sought to dep

Historical Dictionary of South Africa, Third Edition contains a chronology, an introduction, and an extensive bibliography. The dictionary section has more than

Many anthropological accounts of warfare in indigenous societies have described the taking of heads or other body parts as trophies. But almost nothing is known