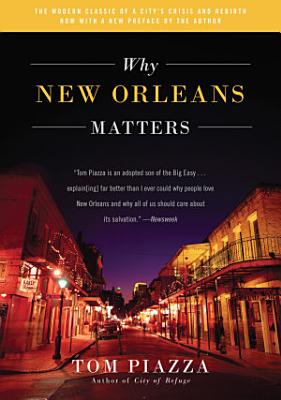 Tom Piazza's award-winning portrait of a city in crisis, with a new preface from the author, ten years after. Ten years ago, in the aftermath of Hurricane Katrina and the disaster that followed, promises were made, forgotten, and renewed. What would become of New Orleans in the years ahead? How would this city and its people recover—and what meaning would its story have, for America and the world? In Why New Orleans Matters, first published only months after the disaster, award-winning author and longtime New Orleans resident Tom Piazza illuminates the storied culture and still-evolving future of this great and vital American metropolis. Piazza evokes the sensuous textures of the city that gave us jazz music, Creole cooking, and a unique style of living; he examines the city's undercurrents of corruption and racism, and explains how its people endure and transcend them. And, perhaps most important, he bears witness to the city's spirit: its grace and beauty, resilience and soul. In the preface to this new edition, Piazza considers how far the city has come in the decade since Katrina, as well as the challenges it still faces—and reminds us that people in threatened communities across America have much to learn from New Orleans' disaster and astonishing recovery.

Tom Piazza's award-winning portrait of a city in crisis, with a new preface from the author, ten years after. Ten years ago, in the aftermath of Hurricane Katri

New Orleans has long been a city fixated on its own history and culture. Founded in 1718 by the French, transferred to the Spanish in the 1763 Treaty of Paris,

Forces of Nature and Cultural Responses

Admitting the Vessel "City of New Orleans" to American Registry

Hurricane Katrina and the Lessons of Disaster Relief

Hurricane Katrina, which hit the Gulf Coast in 2005, exposed the failings and incompetence of local, state, and federal officials, as well as the private sector

Race Rules: Electoral Politics in New Orleans, 1965-2006 examines one of the innumerable ramifications of Hurricane Katrina: a reversal in the decades-long proc