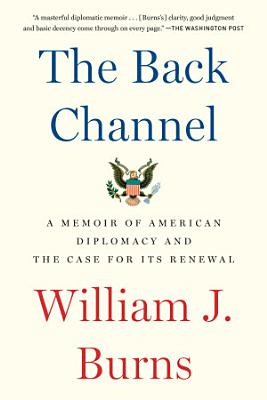 “A masterful diplomatic memoir” (The Washington Post) from CIA director William J. Burns, a career ambassador who served five presidents and ten secretaries of state—an impassioned argument for the enduring value of diplomacy in an increasingly volatile world. Over the course of more than three decades as an American diplomat, William J. Burns played a central role in the most consequential diplomatic episodes of his time—from the bloodless end of the Cold War to the collapse of post–Cold War relations with Putin’s Russia, from post–9/11 tumult in Afghanistan, Iraq, and the Middle East to the secret nuclear talks with Iran. In The Back Channel, Burns recounts, with novelistic detail and incisive analysis, some of the seminal moments of his career. Drawing on a trove of newly declassified cables and memos, he gives readers a rare inside look at American diplomacy in action. His dispatches from war-torn Chechnya and Qaddafi’s bizarre camp in the Libyan desert and his warnings of the “Perfect Storm” that would be unleashed by the Iraq War will reshape our understanding of history—and inform the policy debates of the future. Burns sketches the contours of effective American leadership in a world that resembles neither the zero-sum Cold War contest of his early years as a diplomat nor the “unipolar moment” of American primacy that followed. Ultimately, The Back Channel is an eloquent, deeply informed, and timely story of a life spent in service of American interests abroad. It is also a powerful reminder, in a time of great turmoil, of the enduring importance of diplomacy.

The riveting story of many of the most dramatic international crises and conflicts of recent years, including everyone from presidents, warlords and 'the noble,

Armed with laptops and smartphones, audiences today are no longer sitting quietly taking notes during live presentations. Instead, they’re carving out a new s

Nixon's Back Channel to Moscow

October 1962. The Soviet Union has smuggled missiles into Cuba. Kennedy and Khrushchev are in the midst of a military face-off that could lead to nuclear confla

Originally published in 1977. This book focuses on how to do research in the area of face-to-face interaction when studying human social conduct. It covers the

This book consists of four chapters to address at different modeling levels for different nanoscale MOS structures (Single- and Multi-Gate MOSFETs). The collect

Fully Depleted Silicon-On-Insulator provides an in-depth presentation of the fundamental and pragmatic concepts of this increasingly important technology. There