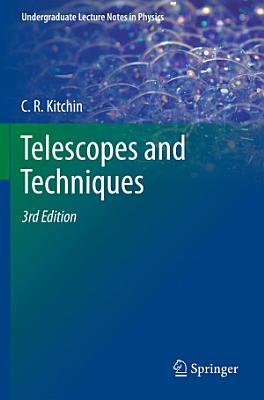 “Telescopes and Techniques” has proved itself in its first edition, having become probably one of the most widely used astronomy texts, both for numerate amateur astronomers and for astronomy and astrophysics undergraduates. The first and second editions of the book were widely used as set texts for introductory practical astronomy courses in many universities. This book guides the reader through the mathematics, physics and practical techniques needed to use telescopes (from small amateur models to the larger instruments installed in many colleges) and to observe objects in the sky. Mathematics to around Advanced Placement standard (US) or A level (UK) is assumed, although High School Diploma (US) or GCSE-level (UK) mathematics plus some basic trigonometry will suffice most of the time. Most of the physics and engineering involved is described fully and requires no prior knowledge or experience. This is a ‘how to’ book that provides the knowledge and background required to understand how and why telescopes work. Equipped with the techniques discussed in this book, the observer will be able to operate with confidence his or her telescope and to optimize its performance for a particular purpose. In principle the observer could calculate his or her own predictions of planetary positions (ephemerides), but more realistically the observer will be able to understand the published data lists properly instead of just treating them as ‘recipes.’ When the observer has obtained measurements, he/she will be able to analyze them in a scientific manner and to understand the significance and meaning of the results. “Telescopes and Techniques, 3rd Edition” fills a niche at the start of an undergraduate astronomer’s university studies, as shown by it having been widely adopted as a set textbook. This third edition is now needed to update its material with the many new observing developments and study areas that have come into prominence since it was published. The book concentrates on the knowledge needed to understand how small(ish) optical telescopes function, their main designs and how to set them up, plus introducing the reader to the many ways in which objects in the sky change their positions and how they may be observed. Both visual and electronic imaging techniques are covered, together with an introduction to how data (measurements) should be processed and analyzed. A simple introduction to radio telescopes is also included. Brief coverage of the most advanced topics of photometry and spectroscopy are included, but mainly to enable the reader to see some of the developments possible from the basic observing techniques covered in the main parts of the book.

“Telescopes and Techniques” has proved itself in its first edition, having become probably one of the most widely used astronomy texts, both for numerate am

The first edition was widely acclaimed in its dual role as an introductory textbook and beginner's guide for serious amateur astronomers. This revised and exten

This book, written by the designer of the worlds largest telescope, the VLT in Chile, covers the essential modern developments in telescope optics. In the last

Astronomy is loved by many people around the world, either for serious research or for fun and curiosity. The one piece of apparatus you need for this endeavor

This book demonstrates the use of an 80mm refractor and shows how it can be used as a real scientific instrument. The author is an experienced small telescope u

Based on field notes made by the author during his own career as an amateur astronomer, this unique guide covers both the traditional and novel approaches to st

Observing the Sun with CoronadoTM Telescopes

For this ground-breaking book, Philip Pugh has assembled a team of contributors who show just how much solar observation work can be accomplished with Coronado

Every night, astronomers use a new generation of giant telescopes at observatories around the world to study phenomena at the forefront of science. By focusing