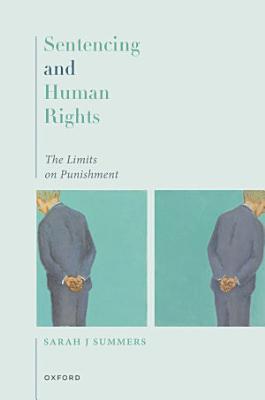 This is an open access title available under the terms of a CC BY-NC-ND 4.0 International licence. It is free to read at Oxford Scholarship Online and offered as a free PDF download from OUP and selected open access locations. There has been little sustained consideration of the ways in which human rights act to safeguard the individual from substantive unfairness or injustice in the imposition of punishment. Human rights might be expected to play a pivotal role at the sentencing stage, regulating the process and substance of sentencing, mapping out the state's role, and affording it legitimacy in the imposition of punishment. The traditional view that sentencing theory is best understood as a branch of moral philosophy has obscured the importance of consideration of the special nature of state punishment as mediated by and through law and the significance of human rights principles, notably legality, proportionality, equality, and judicial responsibility for the determination of the sentence. Sarah Summers focusses on sentencing practices which are widespread across Europe and indeed further afield and their compatibility with constitutional or human rights principles. Sentencing and Human Rights develops a systematic account of the importance of human rights principles at sentencing stage. Consideration of these principles provides the basis for an examination of the way in which they might be expected to limit important sentencing practices, such as the imposition of aggravated sentences for previous convictions, the treatment of confessions and mandatory minimum sentences. It is not just that punishment follows a multitude of aims but rather that the balance of these aims may, and in the context of lengthy prison sentences almost certainly will, change during the sentence. This examination of the human rights limits on the sentence suggests that it might be necessary to reconsider the way in which state punishment is conceptualised in sentencing theory.

This is an open access title available under the terms of a CC BY-NC-ND 4.0 International licence. It is free to read at Oxford Scholarship Online and offered a

Over 100,000 people in the U.S. are incarcerated in prisons owned and operated by private corporations--a booming business. But how are the human rights of pris

Sentencing and Sanctions in Western Countries

This collection of original essays surveys the evolution of sentencing policies and practices in Western countries over the past twenty-five years. Contributors

Human Rights in the Investigation and Prosecution of Crime

A practical analysis of the workings of the criminal law in the context of human rights, dealing systematically with the various stages of investigation, arrest

The Global Decline of the Mandatory Death Penalty

Historically, at English common law, the death penalty was mandatory for the crime of murder and other violent felonies. Over the last three decades, however, m

Andrew Ashworth expertly examines the key issues in English sentencing policy and practice including the mechanisms for producing sentencing guidelines. He cons

Rights of the Child, Mothers and Sentencing

This book draws international attention to the autonomy of the child accompanying incarcerated mothers, and those they leave behind in the community, despite be

The SAGE Handbook of Punishment and Society

The SAGE Handbook of Punishment and Society draws together this disparate and expansive field of punishment and society into one compelling new volume. Headed b

Principles and Values in Criminal Law and Criminal Justice

Celebrating the scholarship of one of the leading lawyers of the common law, Andrew Ashworth, the essays in this volume address fundamental questions of princip