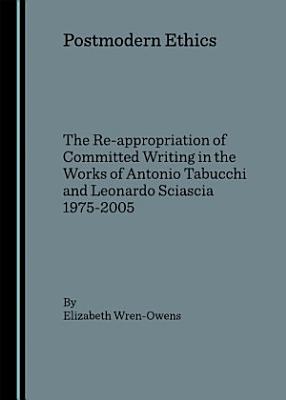 Postmodern Ethics offers a new perspective on debates surrounding the role of the intellectual in Italian society, and provides an original reading of two important Italian contemporary writers, Leonardo Sciascia and Antonio Tabucchi. It examines the ways in which the two writers use literature to engage with their socio-political environment in a climate informed by the doubts and scepticism of postmodernism, after traditional forms of impegno had been abandoned. Postmodern Ethics explores ways in which Tabucchi and Sciascia further their engagement through embracing the very factors which problematized traditional committed writing, such as the absence of fixed truths, the inability of language to fully communicate ideas and intertextuality. Postmodern Ethics provides an innovative new reading of Tabucchi’s works. It challenges the standard view in critical literature that his writing may be divided into ‘engaged’ texts which dialogue with society and ‘postmodern’ texts which focus on literary interiority, suggesting instead that socio-political engagement underpins all of his works. It also offers a new lens on Sciascia’s writing, unpacking why Sciascia, unlike his contemporaries, is able to maintain a belief in literature as a means of dialoguing with society. Postmodern Ethics explores the ways in which Tabucchi and Sciascia approach issues of terrorism, justice, the anti-mafia movement, immigration and the value of reading in connected yet distinct ways, suggesting that a close genealogy may be drawn between these two key intellectual figures.