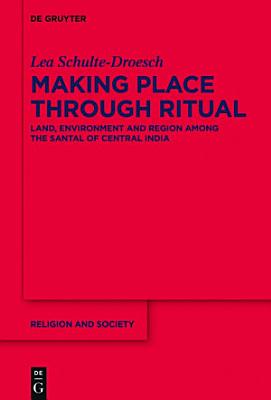 Indian indigenous societies are especially known for their elaborate rituals, which offer an excellent chance for studying religion as practice. However, few detailed ethnographic works exist on the ritual practices of these societies. Based on long-term ethnographic fieldwork in Jharkhand, India this book offers insights into contemporary, previously not described rituals of the Santal, one of the largest indigenous societies of Central India. Its focus lies on culturally specific notions of place as articulated and created during these rituals. In three chapters the book discusses how the Santal "make place" on different local, regional and global levels through their rituals: They reaffirm their ancestral roots in their land during large sacrificial rituals. They offer sacrifices to the dangerous deities of the forest in exchange for rain. And they claim their region to be a "Santal region" through large festivals celebrated in sacred groves, which they link to national and global discourses of indigeneity and environmentalism. Through an analysis of the rituals of a specific society, this book addresses broader issues. It presents an example of how to study religion as a practical activity. It portrays culture-specific perceptions of the environment. And last, the book underlines the potential that lies in choosing place as a lens to study social phenomena in context.

Indian indigenous societies are especially known for their elaborate rituals, which offer an excellent chance for studying religion as practice. However, few de

Place-making and the Cultural Politics of Belonging in a Mixed Korean/ Japanese Locale of Osaka, Japan

Historically, in many cultures around the world, large communal feasts were enactments of narrative through ritual dining experiences that passed cultural value

Iraqi women in Denmark is an ethnographic study of ritual performance and place-making among Shi‘a Muslim Iraqi women in Copenhagen. The book explores how Ira

Report of Proceedings of the Second General Council of the Alliance, Convened at Philadelphia, September, 1880