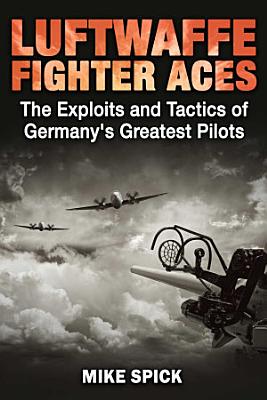 Get in the cockpit with some of the greatest German flying aces of all time! In this exciting book, Mike Spick shows how the Luftwaffe's leading fighter pilots were able to outscore their allied counterparts so effectively and completely during World War II. When the records of the Jagdflieger pilots became available after the war, they were initially greeted with incredulity—the highest claim was for 352 kills, and more than one hundred pilots had recorded more than one hundred victories. However, post-war research proved that these claims had in fact been made in good faith and confirmation had only been given after rigorous checking. To discover the secret of this success, aviation history expert Mike Spick examines the exploits of these aces and sets out the context in which they took place. Every major theatre is covered in detail including the conditions peculiar to each: climate, relative numerical and qualitative strengths, the presence or absence of radar and other measures, and the relative merits of the planes being flown. He focuses on the methods and tactics used by individual aces and uses first-hand sources wherever possible to put the reader right alongside the pilot in the cockpit.

Get in the cockpit with some of the greatest German flying aces of all time! In this exciting book, Mike Spick shows how the Luftwaffe's leading fighter pilots

A pictorial history of Hitler’s fighter pilots that “will be of great interest to aircraft modelers and aviation historians alike” (AMPS Indianapolis). Mi

Aces of the Reich

In 1939, The Luftwaffe was arguably the world's best-equipped and -trained air force. Its fighters were second to none, and their pilots had a tactical system s

Fighter Aces of the Luftwaffe in World War II

This book examines the reality behind the myths of the legendary German fighter aces of World War II. It explains why only a small minority of pilots - those in

From the Bantam War Book series, this is an account of the World War II experiences of the fighter aces of the Luftwaffe.

A fully illustrated account of the Day Fighter Aces of the Luftwaffe from 1942 to 1945.

A fully illustrated account of the Day Fighter Aces of the Luftwaffe from 1942 to 1945.

Aircraft of the Luftwaffe Fighter Aces

Fighter Aces of the Luftwaffe