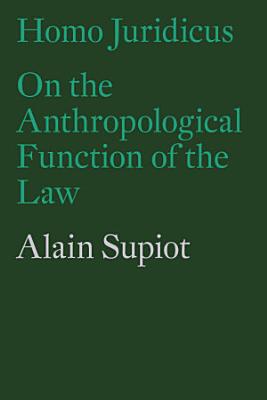 A provocative investigation of how law shapes everyday life. In this groundbreaking work, French legal scholar Alain Supiot examines the relationship of society to legal discourse. He argues that the law is how justice is implmented in secular society, but it is not simply a technique to be manipulated at will: it is also an expression of the core beliefs of the West. We must recognize its universalizing, dogmatic nature and become receptive to other interpretations from non-Western cultures to help us avoid the clash of civilizations. In Homo Juridicus, Supiot deconstructs the illusion of a world that has become “flat’’ and undifferentiated, regulated only by supposed "laws" of science and the economy, and peopled by contract-makers driven only by the calculation of their individual interests. Such a liberal perspectiveis nothing but the flipside of the notion of the withering away of law and the state, promoted this time not under the banner of the struggle between classes, but rather in the name of the free competition between sovereign individuals. Supiot’s exploration of the development of the“legal subject”—the individual as formed through a dense web of contracts and laws—is set to become a classic work of social theory.

A provocative investigation of how law shapes everyday life. In this groundbreaking work, French legal scholar Alain Supiot examines the relationship of society

The Biopolitics of Development

This book offers an original analysis and theorization of the biopolitics of development in the postcolonial present, and draws significantly from the later wor

Birth of the European Individual

This book examines the birth of the European individual as a juridical problem, focusing on legal case dossiers from the European Court of Justice as an electri

This special issue is part one of a two-part edited collection on interrupting the legal person, and what this means. The chapters in this volume interrogate th

Human Rights and the Care of the Self

When we think of human rights we assume that they are meant to protect people from serious social, legal, and political abuses and to advance global justice. In

Neoliberal rationality — ubiquitous today in statecraft and the workplace, in jurisprudence, education, and culture — remakes everything and everyone in the

Sovereignty: Seventeenth-Century England and the Making of the Modern Political Imaginary

This book argues that sovereignty is the first-order question of political order, and that seventeenth-century England provides an important case study in the r

The Psychosocial Imaginaries of Defence Nationalism

The Psychosocial Imaginaries of Defence Nationalism interrogates the emergence of far-right nationalist 'defence leagues' in Australia and the UK. Throughout th

“Education is not an art of putting sight into the eye that can already see, but one of turning the eye towards the proper gaze of Being. That’s what must b