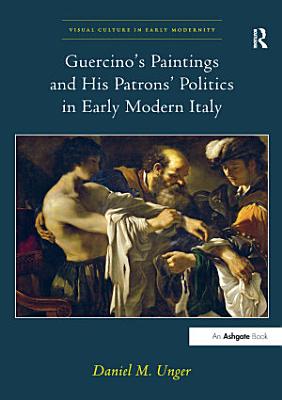 Guercino's Paintings and His Patrons' Politics in Early Modern Italy examines how the seventeenth-century Italian painter Giovanni Francesco Barbieri (better known as Il Guercino) instilled the political ideas of his patrons into his paintings. As it focuses on eight works showing religious scenes and scenes taken from Roman history, this volume bridges the gap between social and cultural history and the history of art, untangling the threads of art, politics, and religion during the time of the Thirty Years' War. A prolific painter, Guercino enjoyed the patronage of such luminaries as Pope Gregory XV, Cardinals Serra, Ludovisi, Spada, and Magalotti, and the French secretary of state La Vrilli?. While scholarly research has been devoted to Guercino's oeuvre, this book is the first to place his works squarely in the context of the political and social circumstances of seventeenth-century Italy, stressing the points of view and agendas of his powerful patrons. What were once meanings only apparent to the educated elite?or those familiar with the political affairs of the time?are now scrutinized and clarified for an audience far from the struggles of early modern Europe.

Guercino? Paintings and His Patrons?Politics in Early Modern Italy

Guercino's Paintings and His Patrons' Politics in Early Modern Italy