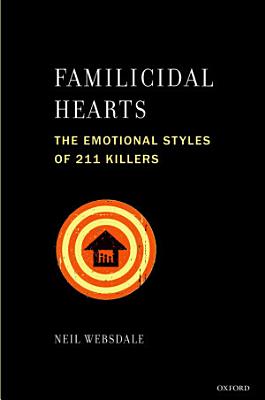 Oscar, physically and sexually abusive, stabbed his partner and two stepdaughters to death, buried the bodies, and fled the state with his two younger children. Paul, a respected investment banker, donned a Halloween mask and shot his wife and two children before turning the gun on himself. What drives individuals as different as Oscar and Paul to kill their families? Why does familicide appear to be on the rise? In Familicidal Hearts, award-winning author and sociologist Neil Websdale uncovers the stories behind 196 male and 15 female perpetrators of this shocking offense, situating their emotional styles on a continuum, from the livid coercive to the civil reputable. With highly detailed and riveting case studies, Websdale explores the pivotal roles of shame, rage, fear, anxiety, and depression in the lives and crimes of the killers. His analysis demonstrates how internal emotional conflict, against a backdrop of societal pressures, is at the root of familicide, challenging the widely accepted argument that murderers kill family members to assert power and control. Websdale contends instead that most perpetrators struggle with intense shame, many sensing that they failed to live up to the demands of modern gender prescriptions, as fathers and lovers, wives and mothers. What emerges is a compelling theory about the haunting effects of modern emotional struggles on perpetrators, controlling and upstanding alike. Captivatingly written and expertly researched, this provocative book weaves a gripping tale of modern-era "haunted hearts." Blending the social, the historical, and the emotional into a new way of making sense of a horrific crime, Familicidal Hearts is a provocative meditation on gender roles, social forces, and modern life itself.

Oscar, physically and sexually abusive, stabbed his partner and two stepdaughters to death, buried the bodies, and fled the state with his two younger children.

Domestic homicide is violence that strikes within our most intimate relations. The most common strategy for addressing this kind of transgression relies on poli

In Flesh and Blood, Sunday World Investigations Editor, Nicola Tallant looks at the rising phenomenon of murder-suicide in Ireland, at events which, while shock