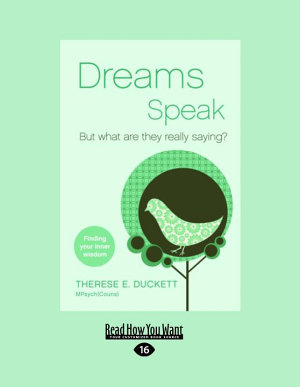 Most people know that dreams occur predominantly during Rapid Eye Movement (REM) sleep, but less well known is the fact that REM sleep is important for psychological health as well as memory consolidation. Research now shows that it also contributes to what is called ""brain plasticity"", which is the ability of the brain to change itself. There are many levels of consciousness, including the five levels of consciousness that occur when we are asleep, as well as other states of awareness such as the transitional states that occur between sleeping or waking, drug induced states of awareness, etc. Dreams can emerge, not only from different levels of the personal ""unconscious"" mind, but also from what is known as the ""collective"" or ""universal unconscious mind"". In this enlightening book, Therese Duckett shows how our dreams are important in helping us understand our lives and improve our health and wellbeing. Using a host of examples from her own casework, she outlines the most commo.