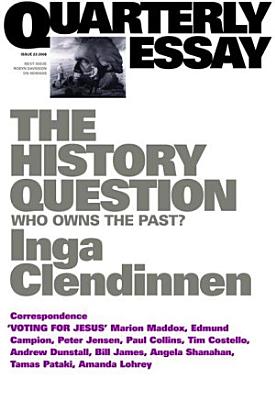 In the third Quarterly Essay for 2006, Inga Clendinnen looks past the skirmishes and pitched battles of the history wars and asks what's at stake - what kind of history do we want and need? Should our historians be producing the ''''''''objective record of achievement'''''''' that the Prime Minister has called for? For Clendinnen, historians cannot be the midwives of national identity and also be true to their profession: history cannot do the work of myth. Clendinnen illuminates the ways in which history, myth and fiction differ from one another, and why the differences are important. In discussing what good history looks like, she pays tribute to the human need for story telling but notes the distinctive critical role of the historian. She offers a spirited critique of Kate Grenville's novel The Secret River, and discusses the Stolen Generations and the role of morality in history writing. This is an eloquent and stimulating essay about a subject that has generated much heat in recent times: how we should record and regard the nation's past. ''''''''Who owns the past? In a free society, everyone. It is a magic pudding belonging to anyone who wants to cut themselves a slice, from legend manufacturers through novelists looking for ready - made plots, to interest groups out to extend their influence.'''''''' - Inga Clendinnen, The History Question.

In the third Quarterly Essay for 2006, Inga Clendinnen looks past the skirmishes and pitched battles of the history wars and asks what's at stake - what kind of

Public History: A Practical Guide explores history in the public sphere and examines the variety of skills that historians require in the practice of public his

Making America: A History of the United States

Shaped with a clear political chronology, MAKING AMERICA reflects the variety of individual experiences and cultures that comprise American society. The book's

Honour, Violence and Emotions in History

Honour, Violence and Emotions in History is the first book to draw on emerging cross-disciplinary scholarship on the study of emotions to analyse the history of

Must We Divide History Into Periods?

Electronic inspection copies are available for instructors In this lively and entertaining book, Robin Wensley guides the reader through the basic analytical ap

Equality and Diversity in Education 1

Offering a philosophy, methodology, and examples for history instruction that are active, imaginative, and provocative, this text presents a fully developed ped