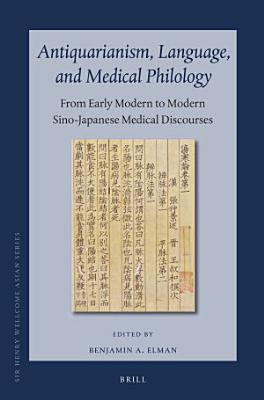 This volume rethinks the role of the Sino-Japanese medical classics during the early modern period in light of antiquarianism, languages, and medical philology. Philology in particular allows the authors to address the changing meaning of the same term, which often reflected well-known metaphors in the source language that were transposed to the target language. Each essay touches on the reliability of received medical texts and their modern fate.

This volume rethinks the role of the Sino-Japanese medical classics during the early modern period in light of antiquarianism, languages, and medical philology.

Over the centuries, Buddhist ideas have influenced medical thought and practice in complex and varied ways in diverse regions and cultures. A companion to Buddh

Chinese Writing and the Rise of the Vernacular in East Asia is a wide-ranging study of vernacularization in East Asia - not only China, Japan, Korea, and Vietna

Visualizing the Body in Art, Anatomy, and Medicine since 1800

This book expands the art historical perspective on art’s connection to anatomy and medicine, bringing together in one text several case studies from various

Mental Health in China and the Chinese Diaspora: Historical and Cultural Perspectives

Following on the previous volume, Mental Health in Asia and the Pacific, which was co-edited with Milton Lewis, this book explores historical and contemporary d

This collection examines psychiatric medicine in China across the early modern and modern periods. Essays focus on the diagnosis, treatment and cultural implica

A Historical Approach to Casuistry

Casuistry, the practice of resolving moral problems by applying a logical framework, has had a much larger historical presence before and since it was given a n

Who is afraid of case literature? In an influential article ("Thinking in Cases", 1996), John Forrester made a case for studying case literature more seriously,