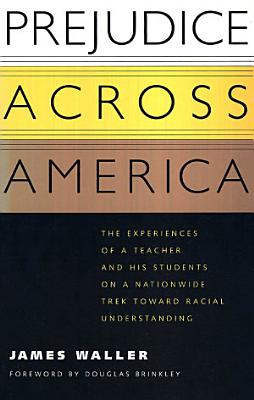 The experiences of a teacher and his white students on a nationwide trek toward racial understanding In 1998 James Waller took twenty-one white college students from Washington state on a month-long journey. Prejudice Across America is the record of their interaction with the American Indian, Asian American, African American, Hispanic, and Jewish experiences nationwide. Few books have so directly and humanly captured the moment when whites confront the realities of those living as a minority in America. Waller reports here on this innovative and award-winning trek. In Los Angeles, San Francisco, Chicago, Memphis, New Orleans, Birmingham, Atlanta, and Washington, D.C., his students hear both the official story of prejudice and the street story from people living and dealing with racism on a daily basis. Prejudice Across America is as much the journal of these travelers and what they face as it is a sweeping, up-close survey of the nation's racial landscape. The students walk the cheerless halls of a South Side housing project in Chicago, experience the agitated aftermath of the Olympic Games in Atlanta, and attend a briefing with President Clinton's Initiative on Race. All along the way, they hold wide-ranging group discussions and experience the unpredictable adventure of traveling by train, plane, and public transit. Drawing on student journals and on interviews with community leaders and activists throughout the country, Waller paints a compelling and provocative portrait of the nation's prejudice. In addition, Prejudice Across America includes analyses of the obstacles to reconciliation in each of the cities on the tour's itinerary. As they travel, students confront the thorny issues of race in America, face down stereotypical thoughts, prejudicial attitudes and discriminatory behaviors, and uncover more tough questions than easy answers. As Waller and another group of students prepare for a similar trek in 2001, Prejudice Across America will allow readers to join them in introspection and self-discovery in the urban reality of an America where diversity isn't simply a buzzword, but a way of life.

Discover the story of Amtrak, America's Railroad, 50 years in the making. In 1971, in an effort to rescue essential freight railroads, the US government founded

Amtrak is an essential part of America’s transportation system for over 28 million passengers. From the legacy Streamliners of the pre-Amtrak era -- Champions

An epic trip across America with much-loved national treasure and comedy legend, Billy Connolly Billy Connolly has spent much of his life in the United States,